Hidden away in a lush green atmosphere, Kandy and the Central Hilly Country is the epicenter of Sri Lanka’s Buddhist history. And you will see the magnificent shrine of the tooth replica in the middle of the ancient region. The golden-roofed temple is home to Sri Lanka’s most prominent Buddhist relic. The holy relic is in a gold casket within which there are six smaller gold caskets.

While the Relic of the Sacred Tooth has been in Sri Lanka since the 4th century, it did not make its way to Kandy until around the 17th century. Stored today in golden-roofed temples concentrated on the banks of Kandy’s lake, the artifact is held in a luxurious condition, on a throne, in a jeweled casket resting on a made of gold lotus.

The relic is the left upper canine tooth of Lord Buddha and is of such religious importance that it is assumed that whoever owns the relic retains the law of the country. Although the interior spaces of the majestic temple are abundantly adorned with engravings and inlays of ivory and wood, among the most interesting aspects about the temple is seeing the visitors, clad in white, arrive with their offerings to pay their great respects to Lord Buddha. The sacred Temple of the Tooth is one of the best places to visit in Kandy.

The Setting of Tooth Relic Temple:

The majestic temple is scenically situated right in the center of the city, next to (western entrance) the lake called Kiri Muhuda, means Milk Sea in Sinhalese, filled with an endless wave-like colorful low-white wall extending through the entire circumference of our perspective.

The Temple is the biggest attraction of the area, nestling closely in the green valley, in the context of the deep green trees of the Udawattakele Forest Sanctuary. The lake is there primarily for the scenic function of the Royal City of Kandy in 1807 AD. And as you know,  Kandy is now a UNESCO World Heritage Site.

The entrance to the precinct: Except for western entry, other entrances to the sacred temple are not open to the public, protected with barricades in this high-security zone. You will join a narrow sandy yard in front of the Queens Hotel, located in an old colonial structure.

A waterfall in the lake splashes a thick curtain of fog over the hills to your right. Locals are leaving their shoes in a shed and getting a token. Tourists, if appropriate, can go to the Main Courtyard (Maha Maluwa) with their shoes to the main entrance gate to the temple: the stone-paved path may be hot on the legs. You could step on to the grass.

Surroundings of the Temple of the Tooth Relic:

The temple complex is enclosed by a moat. Surrounding the moat are two white low walls decorated with elephant sculptures. The outer wall, with its pointed tops, is the Diyareli Bemma (Wave-Swept Wall): the innermost layer, with its rounded tops, is Walakula Bemma (Cloud-Drift Wall); the outer edges in both are for tiny Petri dish, like impermeable lamps illuminated in the dark.

Facing the sacred temple is the much loved and respected peepal tree (bo tree in Sinhala) shaded by four Devales of Hindu deities: Pattini, Devale is for the goddess of chastity; 14th-century Natha devale is for God Natha, the future Buddha, Vishnu shrine is for God Vishnu, and God Kataragama (Skanda Kumar).

The tradition of acceptance of Buddhists towards other faiths has been one of the most essential facets of the island in its 2550 years of an incredibly long history.

When considering the cultural value and historical significance, visiting the Temple of the Tooth Relic is one of the best things to do in Kandy.

Elements of the Temple of the Tooth: The majestic temple has the followings:

Each of these elements has so much to reveal about the ancient Kandian culture and architecture.

A UNESCO World Heritage Site and the most significant Buddhist temple in Sri Lanka, the Temple of the Tooth Relic is a sacred tourist place in Kandy. To visit this glorified tourist attraction, contact Overa Tours today.

We can also include this tourist attraction in your Kandy Holiday. 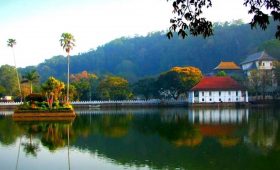 Take a Walk Around Kandy Lake